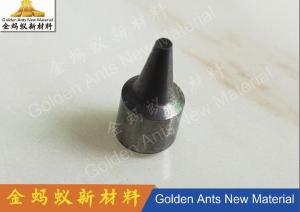 Carbide Sandblasting Nozzles , also known as the tungsten carbide nozzle.It has the character-istics of high temperature resistance, corrosion resistance, abrasion resistance, high precision and soon, even at 500 ℃ temperature basic remains the same, there are still very high hardn-ess at 1000 ℃.It is mainly used in chemical industry, food, machinery, metallurgy, architecture and other industries for pulverizing, derusting, cleaning, atomization, etc.

The hard alloy nozzles produced by our company have a variety of specifications, processed and made with high quality raw material.

The shape of the carbide nozzle hole determines its airflow pattern. The nozzle generally has a straight hole or a restricted hole, a small hole.

3. The nozzle hole nozzle forms a sufficient airflow pattern that increases the grinding speed by up to 100% for a given pressure. Venturi nozzles are the best choice for increasing productivity on larger surfaces. Long-wall nozzles increase productivity by 40% compared to straight-hole nozzles with approximately 40% less abrasive consumption.

4. Double Venturi (Carbide Nozzle 4): Double Venturi and Wide Throat Nozzle are enhanced versions of the long venturi nozzle. The style of the double hills can be thought of as having two nozzles between a set of splits and holes to allow the incoming atmosphere to enter the nozzles of the downstream section. The outlet end is also wider than a conventional nozzle. These two modifications are designed to increase the size of the airflow pattern and minimize the rate of abrasive loss.

Thank you! Your message has been sent to the following suppliers.